The Wesley Orsolic Band is an original Funk, Jazz and Blues band based out of South Lake Tahoe, featuring the musical compositions of guitar extraordinaire, Wesley Orsolic.

For nearly two decades, Wesley Orsolic and Liz Broscoe have combined their creative talents. Their first band, Raw Nature released two albums, Celebrity and Back on Track. Wes followed with two more solo releases, Now and Then and Carry On. And in between their band endeavors, Liz and Wes created the sound track to Liz’s theatrical show, Durga’s Drum Story.

The Wesley Orsolic Band is their latest project with additional band members, Rueben Thompson on bass guitar and Lowell Wilson on keyboards. 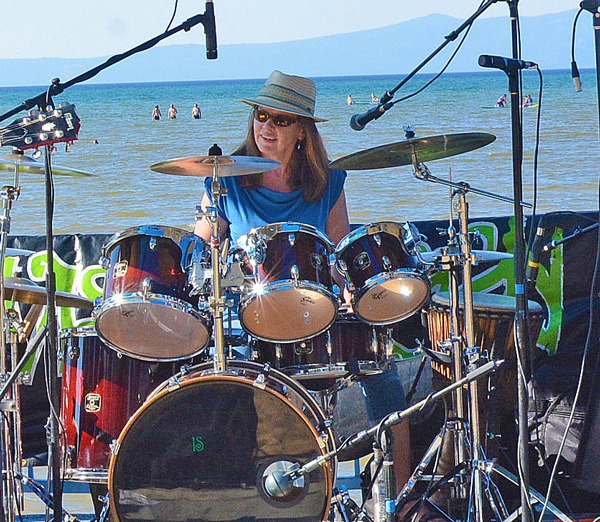 And rounding out the rhythm section was Broscoe. Not since watching Keith Carlock play with Steely Dan have I seen a drummer so subtly command attention onstage. While Broscoe had both chops and general musicality in spades, it was her feel that forced the small crowd from their bar stools. With hints of Afro-Cuban drag permeating just about everything she played, I can say she is, without a doubt, one of the tastiest drummers I’ve ever seen.”

Contact Liz Broscoe for more info on performances, drumming workshops and any of the other drumming services offered by Drumchik.
Contact Liz